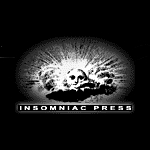 
Insomniac was founded in 1992, and since that time, it has evolved from a small press that publishes poetry chapbooks, to a medium-size independent press that publishes eye-catching non-fiction titles as well as the great fiction and poetry for which it has become known. Insomniac's books are sold in 40 countries around the world. Some things remain the same: Insomniac always strives to publish the most exciting new writers it can find. Celebrated authors like Natalee Caple, Lynn Crosbie, Stephen Finucan and A.F. Moritz either got their start at Insomniac, or have published important books with us.

The common denominator in Insomniac's publishing program is its willingness and ability to venture in new directions, both editorially, and in the areas of promotion, marketing and publicity, all the while maintaining the highest standards in all that it undertakes.