Roaring Lion is the first documentary officially endorsed by leading elders of the Rastafarian Movement.

Filmed in Jamaica, Roaring Lion charts the growth of the Rastafarian Movement and its founder the former Garveyite, Leonard Howell.

With interviews from the renowned academic and Rasta scholar Professor Barry Chevannes and several of the movements leading figures, Mortimmo PLano, Filmore Alvaranga, Dago and Gertrude Campbell, the documentary charts the Movement's growth from a persecuted commune in the foothills of Pinnacle, Jamaica, to an internationally recognised religion and way of life.

Although the Jamaican Government chooses to exploit the iconic imagery of Rastafarianism, and is happy to profit from tourism and record sales attributed to the culture of Rastafarianism, it still refuses to grant the religion official religious status.

This is the first time that the history of the movement and the contribution it has made to Caribbean Culture has been captured in a documentary. With interviews and contributions from the worlds leading figures and early converts, Roaring Lion takes the viewer on a journey into the colourful,<br> vibrant and spiritual world of Rastafari. 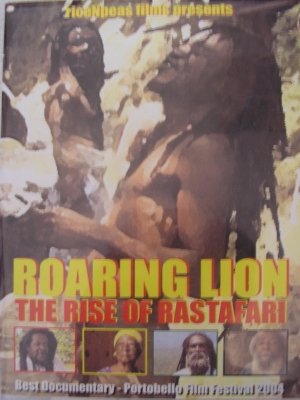