Echoes - The Remixes Vol 1, a collection of 12 remixes from a contest run earlier this year. 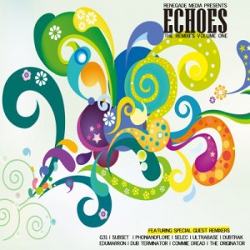 'Echoes - The Remixes Vol 1' is a collection of 12 of the best remixes submitted for a contest run earlier this year by Dubmatix’s for his Renegade Recordings label. The object of the contest was simply for aspiring producers to choose one of four tracks from any of the artists on label roster which were, Early Worm Crawling From The Roots, Nate Wize Blues Blood, Rolling Lion Studio Rightful Ruler and Dubmatix’s very own Inna Eden and create their own highly interesting and original take on the song as they could.

Remixs by: G31, Edumarron, Selec, Dub Terminator, Dubtrak, The Originator, Commie Dread, SUBSET, ultrabase, Dubstructor, and PhOniAndFlOrE were chosen as the best of the bunch and now this album that incorporates styles including Dubstep, Jungle, Roots and Future Dub is available for you to download free via Soundcloud.