40 songs, 20 singles from the rocksteady era.

Earlier this year Dub Store Records reissued a selection of Ska rarities on 7” vinyl on the Federal Records' Kentone label, all beautifully presented with authentic labels and card covers. Now they have shifted their attention to the rocksteady era with no less than 40 songs across 20 singles presented on the Merritone label. 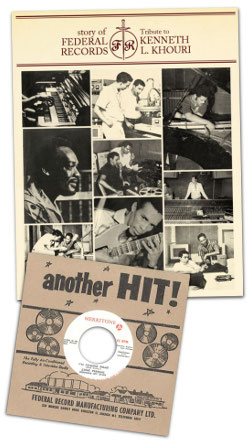 Merritone was founded in 1966 by Ken Khouri with the label taking its name from Winston Blake's sound system. Although not as well known as the likes of Studio 1 or Treasure Isle it was the largest record company of that time in Jamaica. Many songs were recorded with Ernest Ranglin, and fellow guitarist Lynn Taitt among its biggest stars. However many of theses songs only appeared on vinyl records in limited quantities in Jamaica with a small bunch of titles making it to the UK were they were released on the Island label. Due to this many recordings on the label are hardly known and are now considered being ultra rare collector’s items.

Dub Store are now making some of these unreleased, forgotten and hard to find gems available again and included in the roster are songs like I’m Coming Home by Eddie Perkins who worked with Alton Ellis as the duo Alton and Eddy. Then there is Lynn Taitt’s remake of the Batman movie theme, Henry Buckley sings Beware Of All Those Rude Boys and showcases his conscious style with If I Am Right plus there is early Prince Lincoln work with Real Gone Sweet and It’s Not Right that he performed as a member of The Tartans along with Devon Russell, Cedric Myton, and Berg Lewis. If this short list of some of the songs on offer doesn’t whet your appetite for more then check out ReggaeRecord.com.