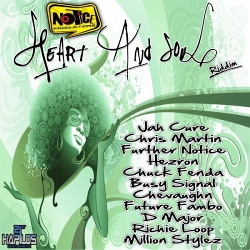 During these years they have performed live with major acts such as Damian Marley, Stephen Marley, Nas, Mavado and Bounty Killer.

Apart from live performances, some of the band have been working behind the scenes under the name Notice Productions, scoring a hit song last year with Holiday by Ding Dong and Chevaughn, featured on VP compilation 'Reggae Gold 2010'.

Heart and Soul is available as digital download at the usual e-tailers.