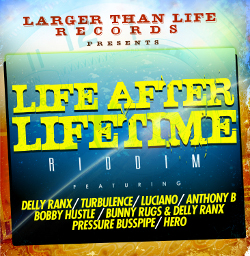 J-Trees and DJ Tosheba from U.S. soundsystem and label Itation Records have formed a new label – Larger Than Life Records. They have previously been producing tunes with the likes of Courtney John, Delly Ranx, Perfect and Anthony B.

Their first production on their new label is the riddim Life After Lifetime, which is produced in collaboration with their longtime friend Delly Ranx.

“Delly is our family and we’ve had an extensive history of working with Mr. Toppa Toppa, so he knew exactly what we were looking for in our first production,” the duo states in a press release.

Life After Lifetime is out for digital release on 14 February, and features eight vocal cuts and one version from artists such as Turbulence, Luciano and Delly Ranx himself – both solo and in a combination with Bunny Rugs of Third World.