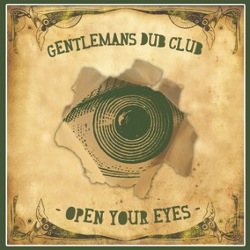 'Open Our Eyes' collects original songs with remixes of their track High Grade by Ruckspin, Tymer and Vibronics.

According to their press release "Since their conception in 2006, Gentleman's Dub Club have cemented their reputation as one of the first live acts to experiment with the cross-pollination of Dub, Dubstep and Ska. The band have brought together respected fans ranging from the Clash to Fat Freddy's Drop and even David Rodigan MBE to become one of the most sought after live bands on the circuit."

Last week 'Open Our Eyes' had already gone to number one on the iTunes UK Reggae chart.