The Echoes of Kingston: The Skatalites on Tour

The Echoes of Kingston: The Skatalites on Tour

Celebrating the 50th anniversary of Jamaican independence plus support of the Alpha Boys School Project.

The current line-up of the Skatalites Band are back on the road to help celebrate this years 50th anniversary of Jamaican independence, their own 48th birthday plus the anniversary of the creation of Ska music with a tour that will take them all over the world and feature a collection of new and original tunes combined with all the classics.

The first leg of this tour, called The Echoes of Kingston tour, started on Friday March 30th in Houton, Texas before heading north to New Mexico and Colorado, then west to Arizona, Mexico, California, Seattle, Washington into Canada and back again to finish at the Viva Ska Vegas event in Las Vegas. As they visit each of these cities they will be aided by a collection of modern bands playing their own distinctive brand of Ska, which the Skatalites were of course a big influence on. Bands such as Keysor Soze, Los Skarnales, The Sentiments, The Georgetown Orbits will be joining them while on the AZ-CA portion they will be accompanied by Los Angeles' leading proponents of ska & reggae, The Delirians who have been forging a sound that is firmly rooted in the past, yet is still distinctly their own. They have also backed and performed with legends such as Derrick Morgan, The Melodians, Derrick Harriot, Stranger Cole and more. 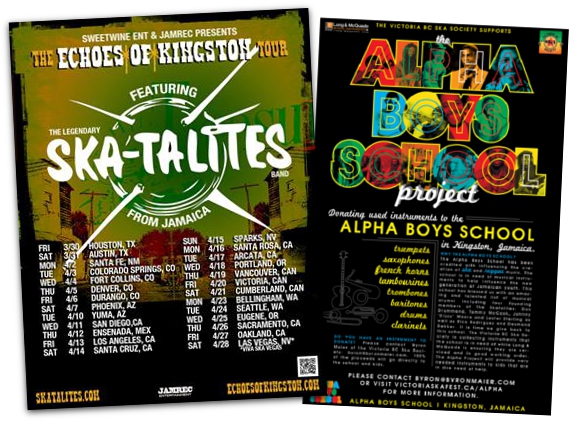 The tour will also be used to help promote The Alpha Boys School Project by collecting donations of unused musical instruments to ship back to Jamaica to help those at the school who do not have one themselves! There are also plans to bring musicians to the school as guest teachers including King Django of Stubborn Records/ Version City fame who plans to teach Trombone.

Anyone attending a show on the tour can bring in any instrument on our list (and some not on the list) in exchange for a CD.

Also any other brass or woodwind instruments are gratefully accepted. If you don’t have an instrument to donate but would like to contribute in some way they are also taking money and other useful items as well.

For more information about donating you can contact Jason Lawless at skatalites@echoesofkingston.com to arrange drop-off at the stop in your city.

While for more information for on the project itself you can visit www.echoesofkingston.com/eok/blog/alpha-boys-school-project/