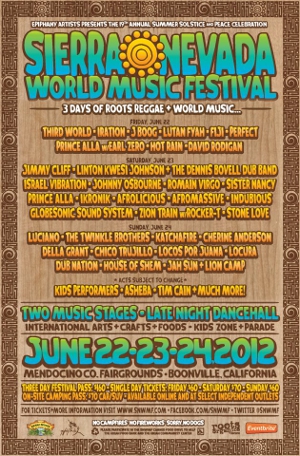 The line-up for the 19th annual Sierra Nevada World Music Festival, taking place on June 22, 23 & 24, 2012 at the Mendocino County Fairgrounds, Anderson Valley in Boonville, California has been announced.

There will be over 30 bands playing some of the best sounds in roots reggae and world music from the four corners of the globe. Headliners for the three day event are Jamaica's own Third World and Jimmy Cliff on the Friday and Saturday respectively plus with his first appearance at the festival in four years Luciano will be helping to bring proceedings to a close on the Sunday. Other artists emanating from the home of reggae music include Israel Vibration, The Twinkle Brothers, Johnny Osbourne, Lutan Fyah, Cherine Anderson, Romain Virgo, Sister Nancy, Stone Love, Earl Zero and SNWMF debutee Prince Alla.

UK acts will include the outspoken dub poet Linton Kwesi Johnson backed by the mighty Dennis Bovell Dub Band. Zion Train who’ll be rocking Boonville with their hybrid of reggae and dance music, while top DJ David "Ram Jam" Rodigan MBE will be spinning a mixture of classic and new sounds.

The southern hemisphere will be represented by Katchafire, an all Maori reggae band and House of Shem both from New Zealand.

Back closer to home will be Hawaii’s Iration with Jah Sun, Dub Nation, Rocker-T, Afrolicious, AfroMassive and LoCura all appearing in their own “backyard”.

On the world music front the audience can expect some treats from Miami's Locos Por Juana and one of Chili's biggest cumbia bands, Chico Trujillo who will be taking to the stage on Sunday night.

As well as all this participants will also find extensive schedule of children's activities, arts and crafts, an international food court, family and alter-able camping, vendors galore plus a large barn, that usually houses antique farming equipment, is converted into a dancehall where sound systems will be heard pounding out reggae beats until the small hours of the morning.