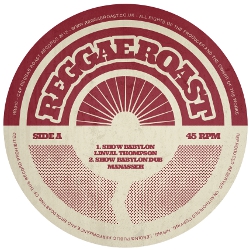 Out now, on 12” vinyl and digital format is the milestone tenth release from the Reggae Roast label. Titled Show Babylon the cut features the vocals of a true legend in Jamaican Reggae Linval Thompson, who first hit the scene with the self-released No Other Woman way back in the early 1970’s. With over a dozen albums to his name he also cut his mark as a producer working with artists including Dennis Brown, Freddie McGregor, Barrington Levy, Eek-A-Mouse, Gregory Isaacs, The Wailing Souls, Triston Palma, Cornell Campbell, Johnny Osbourne, The Viceroys, and Sugar Minott.

This time though production duties, as well as chipping in with a version and dub, fall to a man who may not perhaps be regard as legendary yet, but is well on his way, Nick Manasseh who has been deeply involved in the development of the UK roots scene for the past two decades.

As seems to be the norm now with Reggae Roast productions there is also a dubstep remix which is performed by the highly rated Dutch producer TMSV who recently remixed My Burdens for Foundation Sound.