Mek It Run by Dennis Bovell

Mek It Run by Dennis Bovell 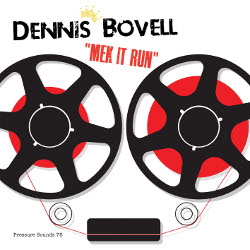 The 75th release by UK reissue label Pressure Sounds is 'Mek it Run', a dub set by UK producer and musician Dennis Bovell. The 16 tracks are new mixes of songs originally recorded between 1978 and 1986. All tunes have been sourced from original master tapes and are remixed by Dennis Bovell at Mad Professor's Ariwa studio in London.

According to Pressure Sounds’ web site Dennis Bovell came up with the idea when he found a stack of boxes containing old two inch multi-track analogue master tapes, some dating back to the late seventies. He selected some likely looking titles that never had the dub treatment and arranged a slot in Mad Professor’s studio.

The cream of the UK’s reggae session player’s are featured on the album and there are also a couple of vocal guest appearances by I Roy.

The 16 tracks are spread over a double vinyl and single CD with sleeve notes by Steve Barker, photos by Adrian Boot and David Corio and artwork and illustrations by John Simms who was responsible for the graphics for the Two Tone label.