A Good Word From Brother Culture

A Good Word From Brother Culture 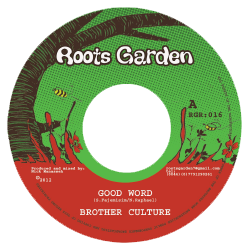 The single follows on from his previous Roots Garden release in 2006 Darker Side Of Town and is a remixed and transformed version of Red Eye which originally featured on his acclaimed 2008 LP 'Isis'.

Brother Culture's fast chat style and militant lyrics come spiritually equipped as he chants against the dogma and wickedness that divide so many, on top of a sinister digi dancehall/roots backdrop.