Two stages with a line up that is as strong and varied as ever. 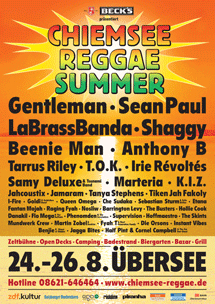 The annual Chiemsee Reggae Festival that takes place at Übersee in the rural district of Traunstein, Bavaria, Germany will this year be held between Friday 24th and Sunday 26th August.

With two stages the line up is strong and varied as ever with the likes of Beenie Man, Gentleman, Anthony B, Shaggy, Tarrus Riley and Sean Paul all appearing on the Main Stage amongst many others.

The Tent stage has a more diverse selection of acts that features Jamaican dancehall veterans Half Pint, Barrington Levy plus the sweet falsetto voice of Cornell Campbell along with new comers such as Raging Fyah, Queen Omega, Fantan Mojah and Hollie Cook plus more 2-Tone and Punk influenced acts like Germany's The Busters and the UK's The Skints.

For more information and a full list of who is on and when visit www.en.chiemsee-reggae.de.