Who's appearing where and when. 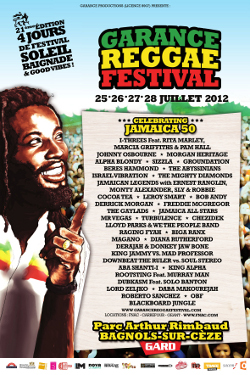 The 21st Garance Reggae Festival at the Arthur Rimbaud Park in Bagnols-sur-Cèze, France, which runs from Wednesday the 25th to Saturday 28th July, has now announced its final confirmed line-up along with who’s appearing where and when.

The festival offers up a great selection of acts that will celebrate the 50th anniversary of Jamaican independence and pay a fitting tribute to this remarkable Island whose musical influence has reached the four corners of the globe.

On the main stage Wednesday will be the I-Threes featuring Rita Marley, Marcia Griffiths and Pam Hall, Jamaican Legends with Ernest Ranglin, Monty Alexander, Sly & Robbie and also Bob Andy, Derrick Morgan, The Gaylads, Lloyd Parks and We The People Band plus Jamaica All Stars, a band formed by French director Pierre-Marc Simonin after his "Portraits of Jamaican Music" documentary in 1998. A group with a fluid line-up that has included debut young musicians and veterans like Johnny Dizzy Moore, Justin Hinds, Scully Sims, Sparrow Martin and Bunny Wilson who’ll be bringing to the stage a journey to the heart of the origins of reggae.

More details about the festival can be found at www.garancereggaefestival.com