A Kraftwerk-inspired riddim from the Mixpak family. 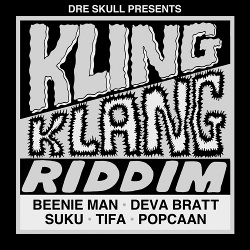 After the adrenalin-stuffed Loudspeaker riddim and the deluxe edition of Vybz Kartel’s Kingston Story Mixpak and its producer Dre Skull strikes again with the Kling Klang riddim. It collects five brand new dancehall tracks by Beenie Man, Deva Bratt, Popcaan, Ward 21’s Suku and Tifa along with an instrumental.

Kling Klang was recorded in Kingston earlier this year and is named after German electronica pioneers Kraftwerk’s studio. The riddim also takes some inspiration from their repertoire with the sound of an engine that breaks into a minimal soundscape high-powered by cymbals, resonating bass and lasers.

The Kling Klang riddim hits the streets on July 24.