Jamaican singer Barry Brown’s youthful tone was hugely popular in the late 70’s and early 80’s and he was able to record with some of the greatest early dancehall producers of the time, including Henry “Junjo” Lawes, Sugar Minott and Jah Thomas. 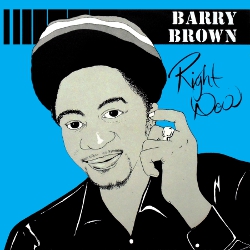 'Right Now' was recorded, voiced and mixed at the legendary Channel One Studios in Kingston, Jamaica, in the early 80’s.

The original ten track album issue has been extended with eight dub versions that showcase the Roots Radics and the We The People Band. Also included is the in-demand non-album sound-system favourite Mafia plus as a special bonus Tristan Palma’s Nuh Shot Nuh Fire as twinned with Barry Brown’s Jukes And Watch on the original Greensleeves disco.

'Right Now' drops on CD and digital download in the UK on October 15, in France on October 29 and in the rest of the world on October 19.