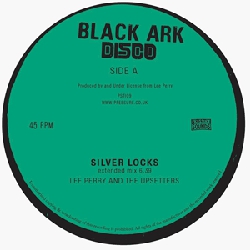 Apart from putting out thenew Lee Perry collection 'Sound Doctor', UK reissue label Pressure Sounds also released a three track disco 12” on November 5. The three tracks were recorded at his Black Ark studio and none of them are on the Sound Doctor album.

The A side is an extended mix of Junior Byles’ Curly Locks titled Silver Locks and is remixed and re-voiced by Lee Perry himself.

The 12” comes in a handmade sleeve stamped by with Upsetters record shop logo.