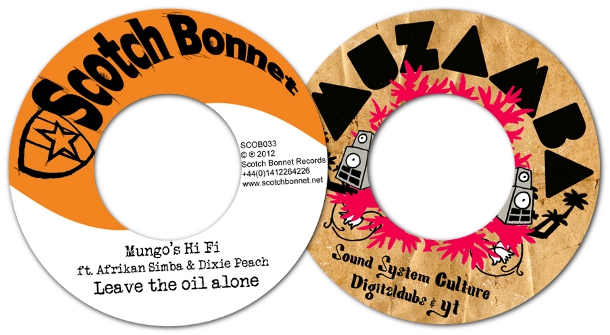 The first is from Mungo's themselves on their own Scotch Bonnet label and features both Afrikan Simba and Dixie Peach on ‘Leave The Oil Alone’. This is a rare combination track from two legends of the UK roots scene on which they vocalise on the madness of the global oil industry and specifically the evils it is perpetrating in Simba's home country, Nigeria. The track rides on the same riddim as Charlie P’s ‘Skidip’ that featured on last years “Forward Ever” album and is dubbed up for the B-side.

The second single is a rough and tuff production from one of South America's top sounds Digitaldubs and features UK reggae dancehall star YT giving a eulogy to reggae culture and how you’ll never better the resonance and experience of being at a real soundsystem. The single is backed by a clean riddim track and is released on the Muzamba label.

Both are releases were released on the 12th November, but you can pre-order now at www.scotchbonnet.net/shop/.