JahLight Records want you to seize the day. 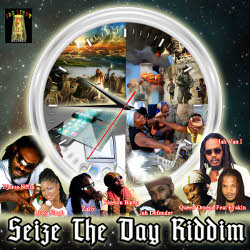 Trinidad & Tobago based label and production house JahLight Records is back with their latest one drop riddim titled Seize the Day, and it follows the crossover effort Soon Come riddim released in September.

The idea behind the riddim was, according to producer Akeunde Pemberton, to inform the world that opportunities must be seized as time is precious and should not be wasted.

“We can’t afford to take life and time for granted. The most valuable opportunity we have is to get to know Christ and with that understood, we just can’t wait until our time is up and it’s too late,” says Akeunde Pemberton in a press release.

The new riddim collects seven cuts by familiar and more unknown vocalists from the Caribbean, including Queen Omega, Jah Van I and Roxy Singh, and was released on December 4.