Ancient Power by Meta and The Cornerstones

Ancient Power by Meta and The Cornerstones

Senegal-born singer Meta Dia (pronounced “Jah” in Senegal) started to rap in the streets as a teenager, but soon moved to New York City to make music full-time. 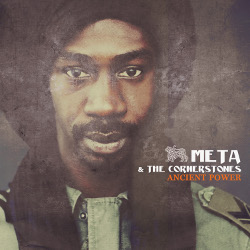 While there he put together his band The Cornerstones and released their debut album 'Forward Music' in 2008, a set that was very well-received – particularly by the New York Times who labeled him the African Bob Marley – and opened doors to recording sessions with Morgan Heritage and invitations to share the stage with Youssou'n Dour and other renowned artists.

Their second set is soon on its way to the streets. 'Ancient Power' – as the album is called –was produced by Meta Dia and Sidney Mills from Steel Pulse at the legendary Tuff Gong studio in Kingston. It collects 15 tracks and features renowned musicians and singers such as Capleton, U-Roy, Damian Marley, Mikey Chung and Dean Fraser.

The album has been postponed several times, but it now set for release via reggae powerhouse VP Records on April 30th on CD and digital platforms.

Tags: Meta and The Cornerstones