Kemar "Flava" McGregor travels back to the 80's to save reggae. 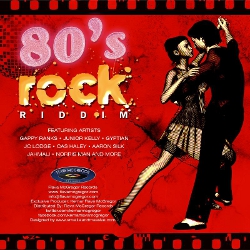 According to the press release for the album Kemar McGregor is dissatisfied with the current state of the reggae music scene and he wants to repair a longstanding credibility problem within the modern reggae industry, an industry described as “erroneously insists on producing music with negative lyrics and depressing musical styles that reggae fans never wanted, and often at the expense of melodic, party reggae, which has always attracted more customers globally than the negative-themed music of the reggae mainstream.”

“The concept of ‘80’s Rock’ is to try to bring people back to the good old days of vocal reggae,” explains Kemar McGregor in the press release, and adds:

“The 1980’s was where reggae got its fame and popularity. There’s a joy that I get from listening to 80’s music – it makes you feel like living is worthwhile. And it’s not just reggae, it’s a lot of the 80’s music. There’s also some good R&B that makes you feel that way.”

When composing and producing the riddim Kemar McGregor was inspired by some of the great riddims of the 1980s, including Barry Brown’s version of Far East from 1986 and the immortal Sleng Teng by Wayne Smith along with and popular albums such as Big Ship by Freddie McGregor and Rub-A-Dub Style by Michigan & Smiley.

“When I used to watch videotapes from the 1980’s, I would see all those people dancing – the couples were slow-wining so tight, that not even the breeze could get through them,” says Kemar McGregor said, and continues:

“When I look at a dance floor today, I’ll hear a bunch of noise coming from the speakers, and when I look at the dance floor, I’ll expect to see a man and a woman dancing, but instead I’ll see a group of men dancing in the middle of the floor by themselves. I don’t want to see that.”

With this project Kemar McGregor aims to send a message that reggae’s survival will require producers to satisfy the demands of real customers.

“Overall, I would say the music of the 1980’s was more uplifting. There was more joy into it. Most of what the artists were saying in their lyrics – whether it was lovers rock, roots or rub-a-dub – you were excited about what was taking place. The stuff they were singing about, like Yellowman and Michigan & Smiley, it would make you want go out and have a good time. That’s why I like the 80’s music. It has a lot of value to it,” concludes Kemar McGregor.