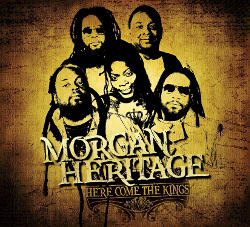 Following their return to New York City and the Caribbean Fever mega-show, Morgan Heritage is now gearing up to release their first studio album since 2008.

While the album is heavy on lovers content, like the pulsing Love Stoned, featuring Busy Signal, 'Here Come The Kings' also includes the message music, including Stand Up, Man Has Forgotten and Dem Ah Run Come.