A rub a dub riddim from Overstand. 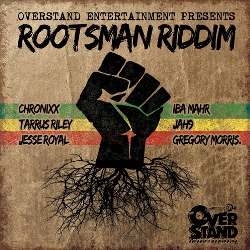 Overstand Entertainment has invited some of Jamaica’s most influential rising stars for the Rootsman riddim, a riddim borrowing from Ini Kamoze’s Sly & Robbie produced heavyweight early dancehall scorcher Wings With Me.

Chronixx, Jesse Royal, Iba MaHr and Jah9 are all enlisted, singing Rastafarian messages, while the more noted and established Tarrus Riley is more in a romancing mood on his Cold Girl. Completing the package is a dub version mixed by Tuff Gong engineer Gregory Morris.