Militant 12" featuring two of the baddest reggae girls on the mic. 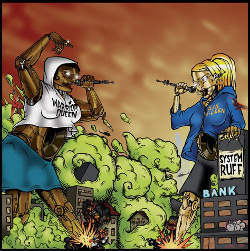 Originating and evolving out of a Geneva squat and the free party scene O.B.F are now one of if not the best sound systems in France and have just released a heavy and militant 12” featuring two of the baddest reggae girls on the mic at the moment Warrior Queen and Sis I-Leen.

The A-Side of this release belongs to Kingston born, Warrior Queen on a pulsing, industrial, reggae beat as she denounces the wicked Babylon system on “System Ruff”. The B-side doesn’t let up as another deep riddim is ridden by Swiss songstress Sis I-Leen, who grew up with UK sound system culture, berating the portrayers of politricks.