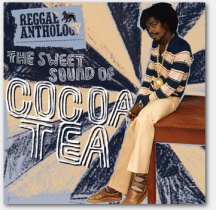 A new compilation on VP Records’ Reggae Anthology serie with the upcoming release of The Sweet Sound Of Cocoa Tea.

This 36 tracks double CD presents the best of Cocoa Tea from his early days in the 80’s with songs as Informer or Lost My Sonia to 90’s hits as Too Young feat. Buju Banton or Israel King. It also features recent songs as Tek Weh Yuh Gal or Save Us Oh Jah. This compilation due out for the 11th March 2008 will be released on new 17 North Parade Vp Records’ imprint specialized in oldies reissues.

After the releases of previous Reggae Anthology compilations dedicated to Penthouse records and Yellowman in 2001, Channel One studio and Garnett Silk in 2004 or Marcia Griffiths in 2007, here is another major reggae artist to rediscover !