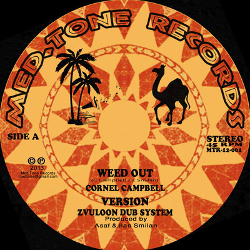 The release is a 12” including four tracks – Cornel Campbell’s Weed Out, a heavy dub version, Zvuloon’s own Going to Zion and Ranking Joe’s deejay cut Nah Give Up – and is now available via several good retailers around the globe.