What's going on at this years event.

No sooner had last years London International Ska Festival finished than work got under way to organise the line-up for this years event that starts this coming Thursday (28th March) at the Jazz Café in Camden Town with legendary trombonist RICO RODRIGUEZ performing his album the “Man From Wareika” in its entirety. He is going to be supported by THE SIDEWALK DOCTORS with deejaying from writer DAVID KATZ before ex-Specials keyboardist JERRY DAMMERS hosts a club night there until 2am. 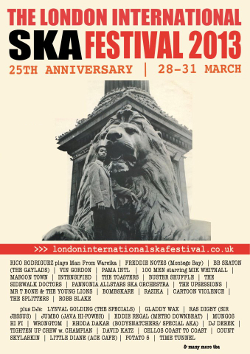 On Good Friday during the day there is a Studio One cruise on The Dixie Queen from Tower Hill, along the Thames being serenaded by the sounds of BB SEATON, OWEN GRAY, VIN GORDON with DJ’s CHRIS PECKINGS (Peckings Studio1) and TRUE IDENTITY. In the evening it’s off to The Garage, Highbury Corner, Islington (opp. Highbury & Islington tube) for some 3rd wave ska from BUSTER SHUFFLE, PANNONIA ALLSTARS SKA ORCHESTRA (Hungary), ED ROME, BOMBSKARE (Scotland) and RAZIKA (Norway) plus across two rooms you’ll have SKYLARKIN and CELLOS COAST TO COAST SOUND SYSTEMS keeping things going until 4am

If after all that you feel the need to relax why not wander round an exhibition/record fair at Dingwalls, Camden Lock, Camden, London NW1 from midday until 5pm or if still haven’t had enough excitement pop along to The Dublin Castle, Parkway, Camden, London NW1 for a DO THE DOG SPECIAL from 2pm-6pm featuring CARTOON VIOLENCE (official album launch party), THE SPLITTERS and former Whitmore front man ROBB BLAKE.
Dingwalls is also the place holding the final event of the festival, between 7pm and 2am, as one of the greatest voices of Jamaican music takes to the stage KEN BOOTHE with guests 100 MEN starring Mik Whitnall and a POTATO 5 DJ set before rounding things off is a closing party THE 2 TONE DISCO – THE SOUNDS OF 79 featuring RHODA DAKAR and THE TIME TUNNEL CREW on the decks.

Tickets for all of these events are still available at www.londoninternationalskafestival.co.uk/tickets/.