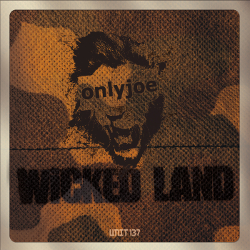 Having just completed a short tour of the UK London based reggae outfit Onlyjoe have just released their third EP titled ‘Wicked Land’.

Some of you may already have this release as it has been available exclusively through the band and at www.unit137.com since March 18th, but now it is available to the world on 12” Vinyl, CD and Digitally.

It is hoped ‘Wicked Land’ will continue to build on the success of their last single, ‘Revolution’ which gained support from some of the scenes most prestigious names. Avery contemporary reggae cut it is supported by remixes from Polish Dubstep titan Radikal Guru, as well as one of the UK's most respected dub producers, Russ Disciples, and rising star Sleepy Time Ghost who himself recently released an EP through Unit137 and this all adds to the growing excitement for the bands highly anticipated debut album.