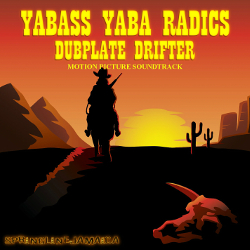 Over the years reggae music has had a thing about Westerns. Lee Perry and his Upsetters brought us tales of Django and the suitably named Clint Eastwood along with General Saint wearing matching fringed leather jackets for the ‘Stop That Train’ album adopted something of the look. Now straight from the wilds of Willesden, London comes Yabass Yaba Radics with ‘Dubplate Drifter’ containing 9 previously unreleased dubplates from the archives of SpringlineJamaica will also appear in a spoof documentary film of the Willesden Posse’s 1981 dubplate wars with the Harlesden ‘Hang Em High’ Crew, which is currently in production.

These dubs definitely have a very early ‘80s feel about them and are as sparse and atmospheric as a lone cactus silhouetted against the setting Arizona desert sun. 'Dubplate Drifter' is available now to download from various outlets as well as from ReelPeopleMuzic.com on CD and in keeping with that ‘80s feel cassette tape!