All or Nothing by Stein

All or Nothing by Stein

Dancehall singer Stein is ready to break out with his debut album 'All Or Nothing', that was worldwide released on June 25 on digital platforms. 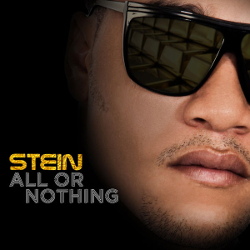 The set bubbles with 15 tracks, of which at least three are previously released, and three satirical skits and is described in a press release as “a bonafide showstopper that offers up Stein’s modern take on dancehall music, driven by up-tempo, heavy-bass beats bound to send dancehall fans into a frenzy.”

“I’ve been pounding the pavement in Jamaica for a very long time and I’ve started taking my music to audiences in Europe and America, and fans have been receptive so I’m on a mission to deliver dancehall music, my way, to everyone.”

For the release Stein has teamed up with a number of Jamaican hit makers, including Wesley “Supa Blunt” Haye, Chimney Records and JK4 Music Group.

“Unlike many contemporary dancehall artists, Stein is one of the most clever lyricists on the scene,” states Zack Cohen, CEO of Fox Fuse, the label responsible for putting out the album, and continues:

“We’re fans of his work and we wanted to provide him with a platform that was previously unavailable to him. We have the means and he has the talent, and we’re very thrilled with the outcome of this venture.”