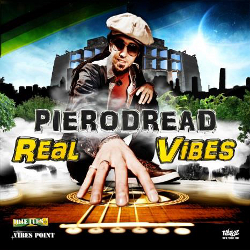 Italian singer, musician and producer PieroDread has been making music for ten years and got something of a break a while ago with his song So Precious, a combination with fierce Jamaican deejay Anthony B.

Now he has released his debut album 'Real Vibes'. This 15 track set was produced in collaboration with Italian backing band the Smoke Band, House of Riddim from Austria and Oneness from Germany. It collects combinations with Mojo Morgan from Morgan Heritage, Askala Selassie, Raphael and Jah Son, who’s, just as PieroDread, a member of a band called Franziska.