Soul of Anbessa send out a warning.

Swiss journalist and producer Marc Ismail of Soul of Anbessa records has a third roots rhythm in the offing.

The follow-up to his "Shuttle" and the "Tizita", is called "Abeng". According to Ismail the name comes from the warning horn used by ancient Maroons, the rebellious ex-slaves who defied the colonial powers and set up their own self sufficient inland communities in Jamaica. 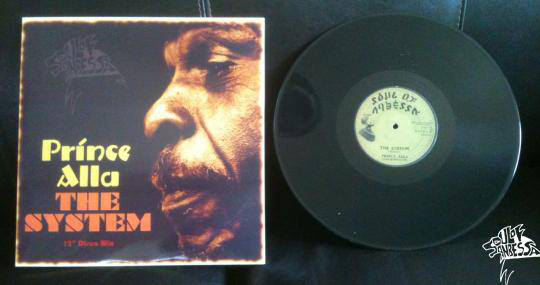 The initial 12” is a double A-sider. First up is Ismail’s friend the Greenwich Farm “gentle giant” Prince Alla with The System, featuring Ismail’s not so gentle militant lyric that warns that if the rich keep getting richer they may be on the menu!

The flipside features two of the re-formed Gaylads, Maurice Roberts and Randall Thaxter, as their duo the Psalms. Revelation Time is layered with horns from trombonist Nambo Robinson, and Swiss trumpeter Alex Schneiter. Both songs were voiced at Anchor studio in Kingston, in 2012. The vocals melt into heavy dubs, mixed by Donald Tixie Dixon at Anchor, and Adrien Oesch in Switzerland.

The first blast of the Abeng is out on 12” now. Two more cuts, by Leroy Brown and KC White, follow on 7” later this year.