Be Careful by Matthew McAnuff

Be Careful by Matthew McAnuff 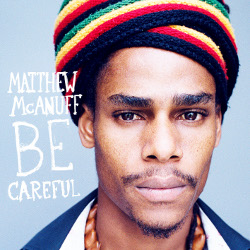 The album bears the title 'Be Careful', just like his popular Earl “Chinna” Smith-produced debut single, which also happens to be included on the 15 track album.

Matthew McAnuff had begun working on the album in 2009 at the Harry J studio in Jamaica, but wasn’t able to finish it. French producer and musician Fixi has now put the final touches to it and it will drop on July 15.