French singjay Biga Ranx made a name for himself in 2008 when he teamed-up with gruff voiced veteran Joseph Cotton for a freestyle combination in the studio. The Youtube video was a success and has today been viewed more than one million times. 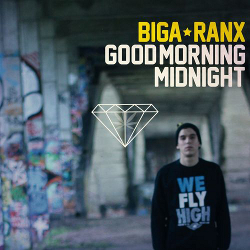 Three years after the video was launched he dropped his debut set titled 'On Time', which was voted best ragga/dancehall album that year by French website Reggae.fr. The following year he initiated a new project titled 'The World of Biga Ranx', a project that included four vinyl EP’s for four different producers – Maffi, Ondubground, Kanka and Mungo’s Hi-Fi.

This productive youth has now managed to put out his second full-length album. It’s titled 'Good Morning Midnight' and collects 20 tracks in the reggae/dancehall/hip-hop vein. Three of the songs have been released as singles – Don’t Stop Jammin’, Zip Bag and Wild World.