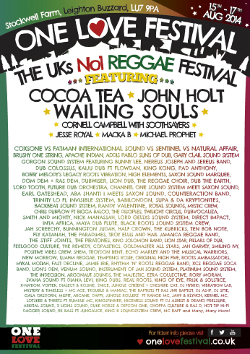 England’s One Love Festival has announced its latest line-up and a new setting in Bedfordshire.

You can also expect the usual mass congregation of sound systems and a Battle of the Dubplates between Coxsone, Fatman, Sentinel and Natural Affair.

“After spending 6yrs in South East of England One Love has naturally moved to more geographically Central location to a green field site where all UK Reggae Fans to unite” said the organisers in a press release.