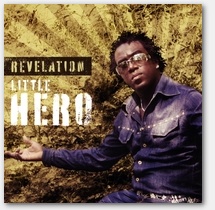 Announced until his hit Inna De Ghetto on Real Life riddim in 2006, Little Hero debut album 'Revelation' was firstly released in Japan only in November 2007. This set finally comes out this month internationally on his Inspire records and present the debut album of a real gifted singer.

With 15 tracks, 'Revelation' includes some of its recent songs as Too Much Violence, Prayer, No More War, Inna De Ghetto along with new material like Revelation Time and Town Of Sorrow. Check it out !