The new album from the singer (who turned 50 this year). 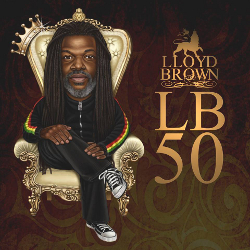 Lloyd Brown has announced the release of his 18th studio album LB50.

Issued by his own company Riddimworks Productions and Phoenix Music International, LB50 is titled in celebration of the singer-songwriter’s 50th birthday which he celebrated in March. The cover art is illustrated - once again - by Jerry Neville.

It’s the next instalment in an unbroken run of critically acclaimed albums – the last being 2013’s Rootical with US/VI production trio Zion I Kings.

LB50 is out Friday 30th May 2014 for download only from digital platforms.