Easy To Love by Maxi Priest

Easy To Love by Maxi Priest

Maxi Priest is an extremely successful British reggae artist with over 15 million sold albums worldwide, a number one hit on Billboard and a Grammy nomination under his belt. He has kept a low profile for a while, but now he’s back with a brand new studio album titled Easy to Love, available on June 10th in the U.S., June 16th in the UK, June 30th in France and June 20th in the rest of Europe. 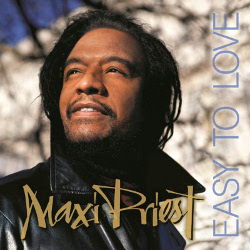 “This album is about time, and a moment,” says Maxi Priest in a press release.

The new album collects eleven tracks and a combination with no other than lovers rock maestro Beres Hammond and dancehall don Agent Sasco. In a press release the album is described as sophisticated lovers rock and an effortless blend of reggae, R&B and dancehall, as shown on lead single Easy to Love, which reached number one on reggae charts last summer.

The title track features legendary drum and bass twins Sly & Robbie, who’ve played on some of Maxi Priest’s biggest hits, including Wild World, Some Guys Have All The Luck and the monster hit Close To You. The title track also comes with a wicked remix featuring rising UK dancehall deejay Stylo G.