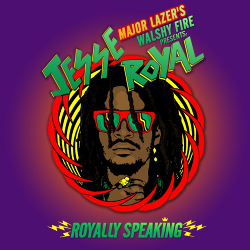 This is Jesse Royal’s third official mixtape and his first with Walshy Fire, a DJ and producer that has previously dropped storming sets with Addis Pablo and Chronixx.

Royally Speaking comes with 25 tracks mixed together by Walshy Fire. It comes with original cuts, interludes, dubplates and hip-hop-flavoured remixes and is available at Soundcloud.