Pressure has teamed up with producer Baby G for his new album due out on September 16th. 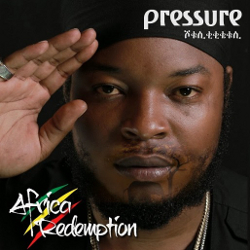 2014 is definitely a productive release year for Pressure! Following his album The Sound on I Grade Records in early 2014, the VI Reggae star is now about to release his fifth album with producer Baby G (son of the legendary King Jammy) . “It’s basically an in-house album,” said Pressure to Angus Taylor. “We’re doing it by ourselves. Pressure is not signed to any big label. (…) I’m an independent artist”. Africa Redemption, whose release was postponed since 2012, will be available on September 16th on Baby G’s Yard Vybz label.

“That is one of my favourite projects. The music leaves me speechless. It’s crazy off the wall. I can’t wait!” said Pressure. Indeed, this new 17 tracks album features serious tunes – from roots to dancehall - and top guests appearances from Chronixx but also from Damian Marley and Tarrus Riley, and Jah Mason. One more time, Pressure shows all his vocal skills and proves he’s a multifaceted singer and singjay confortable on every kind of riddim!