Rongorock drops a double A side. 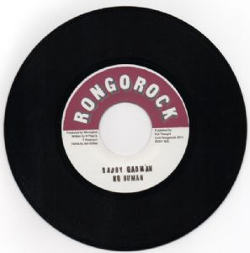 In contrast to the chirpy Oystah Card, No Human is a sufferers’ song of sympathy for the homeless on the minor key Suzy rhythm (which appeared on the Wrongtom Meets J Deemas album).

Mic Shy is a humorous piece on the Oystah backing that tackles the surprisingly under-represented topic of a good microphone sound.