The four seasons of Fireman Crew. 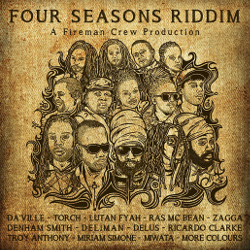 Austria’s Fireman Crew has for about six years been building riddims and providing backing for a number of reggae artists, mostly from Europe and the Caribbean.

Their latest production is the Four Seasons Selection, an up-tempo riddim in the one drop tradition. The riddim comes with 13 cuts from a number of well-known artists, including Lutan Fyah, Ras Mac Bean and Da’Ville. It also collects strong efforts from lesser known singers, for example Ricardo Clarke, Zaggaand Troy Anthony.

The Four Seasons Selection dropped as digital download on September 19.