Africa and Jamaica are one on her new EP

It’s a collection of reggae songs sung entirely in Swahili. Following radio play in Africa they have been issued worldwide. 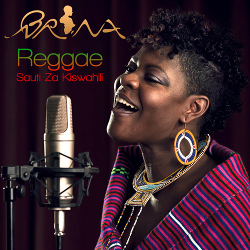 “Swahili is the largest non-European pan-African language, a Reggae Swahili EP by a Jamaican singer has never been done before, and Brina’s songs in Swahili are currently winning fans in East Africa (Kenya, Tanzania, Uganda), and is now available throughout the world” says a press release from Brina and her husband Kieran Murray’s Tribal Global Records.

Brina adds “It’s important to transcend language barriers, musical borders, and make music for the people of Africa, for that is where a portion of my heart dwells. I see myself as the successor of my ancestors and, through my music, pay homage to them with every note I sing. Even though I was born in Jamaica, I needed no serious convincing from anyone that I am African.”