French label Amoul-Bayi Records is back with a serious new 12'' release. 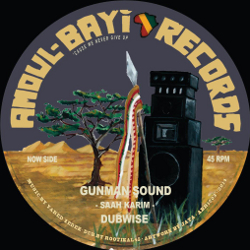 2015 hasn’t begun yet but we can already say that it should start quite well, at least musically speaking. This is thanks to the French label Amoul Bayi and its new production recorded between Marseille (France) and Dakar (Senegal). On the first side, a future soundsystem anthem "Gunman Sound" with the talented and promising singer Saah Karim from Goree Island (Senegal) on vocals.

"With this tune, Saah Karim condemns the fact that our systems prefer to hear the sound of dissension and violence rather the sound of culture and music" says Fabyah, founder of Amoul-Bayi Records.

On the flipside, a killer instrumental dub version "Skank To Azania" featuring Martinican saxophonist Sta’ Sax aka Stamina Li, who is based in London (UK). Both cuts - on a solid ‘stepper’ riddim built by the young French artist Yared Zedek (check the 'making of video' just below) - are mixed by Rootical 45 aka MC Oliva from French sound system Blackboard Jungle. Only played by Blackboard Jungle until now, this third production from Amoul Bayi will be available on 12'' vinyl and digital download in early January 2015. Just too bad that it won't be out before the end of 2014... It would have been a nice gift for the year's end celebrations!