Friends On Benefits by The Meow Meows

Friends On Benefits by The Meow Meows 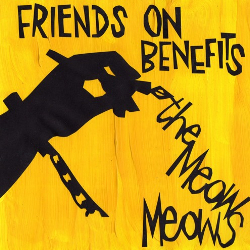 The EP emerged as part of a commission by Fuel Theatre for their "Music to Move to" project, which saw ten musical acts team up with choreographers to create works which would inspire the general public to dance. The title track was the band's emphatic response.

And all three tracks on Friends on Benefits are in a press release described as danceable, showcasing a style that has clearly been refined through years of moving feet in Brighton basements.

Friends on Benefits will be released via Jump Up! Records as a limited edition 7ʺ vinyl and digital download from 13th July.