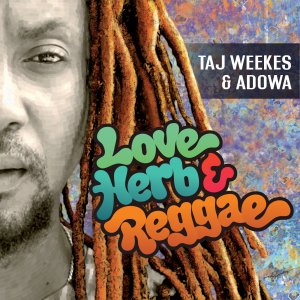 After being delayed several times it seems like it's finally time for St. Lucian singer Taj Weekes and his band Adowa to drop their fifth album Love Herb & Reggae. The set is slated for release on February 12, 2016, and the title is a reference and an answer to the decades old mantra "sex, drugs and rock & roll".

The album carries 14 tracks and as usual with Taj Weekes it expounds on social themes with a progressive approach and calls to action for change. "The Rasta philosophy helped shape me. I've always spoken for what's right, but in my songs I held back a bit. Now I want to shout it out for everyone to hear. No more Taj the person and Taj the musician – after all, they are one," explains Taj Weekes in a press release.

For this set Taj Weekes has advanced his messaging and changed his creative process.

"For me this is very much a breakthrough. Previously I'd use a few chords, whatever sounded good, and sing over them; this time I carefully chose chords that not only fit the melody but would support the words. I jump from major to minor wherever necessary to get what I really want," he says.