Roots reggae veteran singer Fred Locks has teamed up with U.S. producer and multi-instrumentalist David Ondrick, aka David O., for the new album Time to Shine, which dropped in November, 2015. 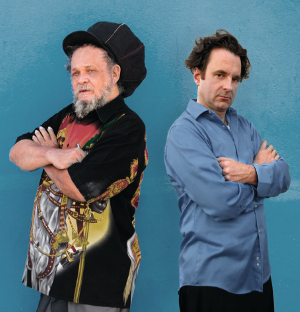 Time to Shine has taken eight years to complete and was recorded in both Jamaica and the U.S. The album was recorded using only live instruments and David Ondrick wanted everything to be perfect and organic-sounding.

“In a world of ‘copy-and-paste,’ I did not even allow musicians on this project to play it once and then fly the pieces around. If the identical horn line came up three times in the song, then we played it three times. You hear the slight difference in inflection and feel each time as the song builds, like a live show. So, although we did the sessions in a multi-track format, this is very close to a live experience,” explains David Ondrick in a press release.

Each vocal track is followed by an instrumental cut featuring horns from David O.

“I wanted to let the music take on a complimentary vibe from the stately vocal work of Fred Locks, and spotlight great work from musicians who don’t always get their time to shine,” says David Ondrick, and adds:

“On a global level, the songs on Time to Shine speak to all people, regardless of their work, occupation, or culture. Fred and I believe now is the time for each of us to shine forth with an individual and personal clarity with the intention of uplifting all those around us. With this album we want to tip the balance one person at a time”.