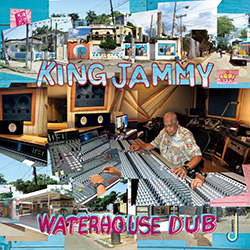 Jamaican producer/dubmaster King Jammy is returning to the ring with Waterhouse Dub.

It features new dub versions of some of his hits such as Please Officer, Boom Shack A Lack and Jail House. The CD version includes to deliver 15 tracks with poster fold booklet, while the LP vinyl edition is a selection of 10 tracks.

Waterhouse Dub is available since August 11th 2017 on Vinyl, CD and digital plateforms.