10,000 Lions are ready for Goa Sunsplash

10,000 Lions are ready for Goa Sunsplash

The roots and dub sound system will play the Indian festival in January 2018. 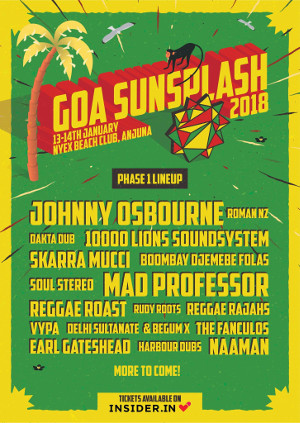 10,000 Lions describe themselves as “the first ever reggae dub soundsystem in India.” Their sound rig was built in a jungle house in Agarwada by a team of Italian, Sardinian, Swedish and Indian reggae devotees. The project was a collaboration between members of Italy’s Ital Soup Records, Sardinia’s Filuferroots, Realoveution Hi Fly/Sardinia Reggae Festival, Sweden’s Ninjahdread, and India’s Reggae Rajahs.

“The team mission is to spread reggae music, its message, its massage, and the natural sustainable lifestyle” say 10,000 Lions in a press release “Inspired by Rasta culture, Shiva culture and Permaculture, it's a musical trip to the roots of the cosmic identity. Roots music brought us together at the junction between the Rasta culture (especially the dreamy militant utopian equalitarian way) and Hindu culture (especially Advaita Vedanta stream and Sadhu lifestyle).”

More details on Goa Sunsplash can be found here: https://www.facebook.com/GoaSunsplash.