Jah Rej’ UK label releases a new 12' with one vocal cut by Princess Jewels and heavy instrumental versions. Not to miss ! 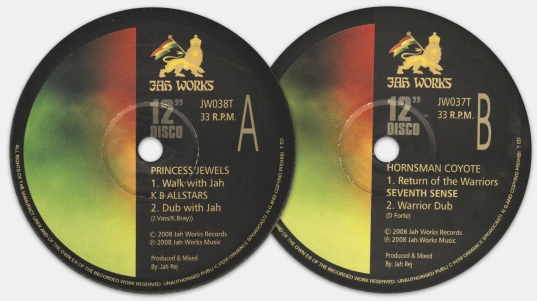 Jah Works productions are rare and always quality releases. Based in Reading, UK, this roots reggae & dub label is well known by UK roots followers thanks to his owner and producer, Jah Rej who worked with artists as Martin Campbell, Donette Forte, GT Moore, Meneman or Aqua Levi. Since the late eighties, he produced a unique sound, a blend of modern and old school, establishing his label as one of the best of the UK reggae scene.

Here is the latest release now available on Jah Works. Strictly roots music on this new 12’’ including the deep Walk With Jah voiced by Princess Jewels, and on the flipside, the killer roots instrumental Return Of The Warrior by Hornsman Coyote from Serbia, and its ruff dub Warrior Dub powered by Seventh Sense band. Essential roots reggae produced and mixed by Jah Rej.